TASHKENT, 23 December 2019 – Improvements to Uzbekistan’s election law and greater acceptance of freedom of expression are to be welcomed, but did not offset the absence of opposition parties, a continuing lack of respect for fundamental rights, and some serious irregularities on election day, international observers to the parliamentary elections said in a preliminary statement published today. 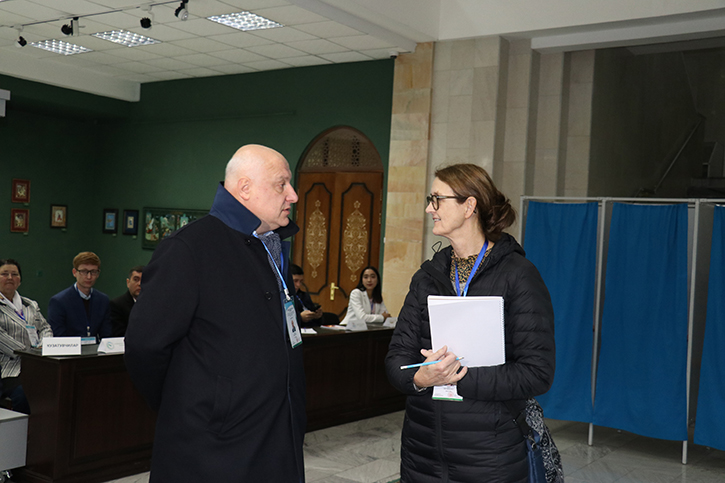 Special Co-ordinator President Tsereteli and Head of OSCE PA Delegation Henriksen at a polling station in Tashkent, 22 December 2019The observation mission, a joint undertaking of the OSCE Office for Democratic Institutions and Human Rights (ODIHR) and the OSCE Parliamentary Assembly (OSCE PA) concluded that recent changes to election legislation bring it closer to the international standards to which all OSCE countries have committed. At the same time, the legal framework related to the fundamental rights and freedoms essential for democratic elections is still overly restrictive. The crucial right to freedom of association, which includes the right to form a political party, remains limited.

“While an important milestone has been passed, old problematic habits – including on election day – make it clear that much work remains,” said George Tsereteli, Special Co-ordinator and leader of the OSCE short-term observer mission. “The wide-scale reforms being pursued by the authorities in Uzbekistan have had a real and direct impact on these elections, but democratic development requires increased competition and respect for basic rights and freedoms. We look forward to continuing our support for this process.”

Electoral preparations were efficient and accompanied by an intensive voter information campaign. Election day was calm, but tarnished by multiple irregularities, including voting on behalf of others and disregard of key counting procedures. The introduction of a new centralized voter register is a significant step forward, but still has to be fully implemented in practice. At the same time, inadequate public funding, as well as an inflexible and overly detailed framework, had a negative effect on candidates’ voter outreach. Campaigning itself was generally limited, and outside the media there was little evidence of active debate.

The parliament has been given additional competences in recent years that could potentially make a significant change to the balance of governmental power. However, as all parties are supportive of presidential policies and there are no opposition parties, voters are left without a real choice. At the same time, women remain substantially underrepresented in public and political life. In addition, the reforms so far have been characterized by a top-down approach that needs to be complemented by opportunities for initiatives at the grassroots level.

“The unprecedented number of women who ran for office yesterday may be a sign of the changes happening in Uzbekistan,” said Kari Henriksen, Head of the OSCE PA delegation. “While these elections were clearly more open than in the past, there remains a very limited range of alternatives for voters to choose from. I hope that the commitment to reform that we’ve noted from the leadership here will quickly consolidate throughout society.”

Recent reforms have created more space for citizens to air their grievances publicly, as tolerance of criticism of the state administration has grown. The degree of freedom of expression in the media has also improved, and some people now feel able to post views online through blogs and social networks. At the same time, public dissent both online and offline can result in punishment, and numerous legal provisions on criminal and administrative offences could inhibit free speech.

“Independent voices are growing in number and strength, and there is a new sense of freedom. This is very much to be welcomed,” said Tana de Zulueta, Head of ODIHR’s election observation mission. “But this freedom has rigid limits, and public dissent can still result in prosecution or detention. As one person told us: ‘we are trying to do new things with an old machine’. ODIHR looks forward to continuing its work with the Uzbekistan authorities to help them improve their democratic institutions and take the country forward.”

The international election observation mission for the parliamentary elections in Uzbekistan totalled 316 observers from 37 countries, comprising 271 ODIHR-deployed experts and observers, and 45 parliamentarians and staff from the OSCE PA.

For the full statement of preliminary findings and conclusions, please click here.
Photos of the election observation mission are available for public use on Flickr.