KYIV, 19 December 2019 – An OSCE Parliamentary Assembly delegation holding meetings in Kyiv this week welcomed the resumption of dialogue between the leaders of Ukraine and the Russian Federation and the outcomes of the recent Normandy Four summit in Paris. In discussions, the PA delegation explored ways the Assembly can continue to support Ukraine as well as the incoming OSCE Albanian Chairmanship’s priorities. Ukraine’s decentralization efforts, humanitarian issues, economic reform and good governance were also emphasized.

“The OSCE Parliamentary Assembly stands firmly behind Ukraine’s sovereignty and territorial integrity within its internationally recognized borders, including Crimea,” said President Tsereteli. “We also stand firmly for peacefully resolving the conflict through political and diplomatic means. The recent high-level dialogue between Ukraine and the Russian Federation is a ray of hope and we must build on this momentum to follow up swiftly and keep full implementation of the Minsk agreements high on the agenda of all sides.”

Commending the engagement of the leaders of France and Germany, he added that he was glad to see the commitment for the next meeting of the Normandy Four within four months and noted that it is reassuring that disengagement has taken place in three pilot zones. “The repair of the Stanytsia Luhanska bridge is also a welcome development,” he emphasized, “as well as the commitment to opening additional crossing points.”

Tsereteli, Hadjiyianni and Hoxha met Tuesday with Chair of the Verkhovna Rada Dmytro Razumkov, members of Ukraine’s OSCE PA Delegation and the Foreign Affairs Committee, as well as the leaders of two parliamentary groups, David Arakhamia and Artur Gerasymov, and visited the office of the OSCE Special Monitoring Mission (SMM). Topics of discussion with Razumkov included outcomes from the Normandy summit and appropriate legislative efforts underway in Kyiv. The delegation encouraged the Verkhovna Rada to maintain the high pace of the parliament's follow-up legislation to the Paris agreements.

A meeting was held Wednesday with Ukrainian Foreign Minister Vadym Prystaiko, with Tsereteli stressing the PA’s readiness to support the present momentum and further steps towards solutions that improve the plight of people in the Donbas. This would include an involvement in the monitoring of local elections in case demilitarization and other future developments allow for free elections in accordance with Ukrainian legislation. Tsereteli also said that Ukraine’s active participation in the PA is vitally important to maximize the OSCE’s efforts to resolve the conflict, noting that he hopes it will continue in 2020. 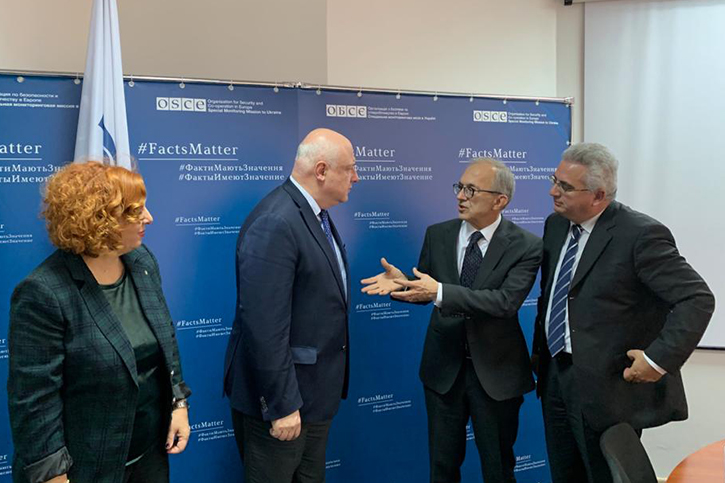 Elona Gjebrea Hoxha, George Tsereteli, Halit Cevik and Kyriakos Hadjiyianni in Kyiv, 17 December 2019Meeting with the SMM Chief Monitor Ambassador Halit Cevik and Deputy Chief Monitor Antje Grawe, the delegation was briefed about the challenges for the mission that stem from last week's agreements in Paris. The PA delegation reiterated the Assembly’s readiness to support the implementation process following the Minsk agreements of 2014 and 2015. The PA members commended the crucial role the SMM continues to play in the disengagement process through dialogue facilitation, as well as reporting and verification at all stages of the process. It is therefore imperative that the SMM gets unhindered access to effectively monitor these areas, they stressed.

The PA delegation also met with representatives of the diplomatic corps.

This is the sixth time that members of the OSCE PA have visited Ukraine this year, underlining the high priority the PA attaches to the conflict. Supported by the OSCE PA’s Special Representative Amb. Andreas Nothelle and Chief Political Advisor Francesco Pagani, the visit comes a little more than a week after the Normandy Four summit in Paris.