MINSK, 29 April 2019 – OSCE PA President George Tsereteli (MP, Georgia) met today with Belarusian President Aleksandr Lukashenko to emphasize the importance of close co-operation between Belarus and the PA, discuss efforts to put an end to the armed conflict in eastern Ukraine through the Minsk negotiating process, and address the status of democratic reforms. 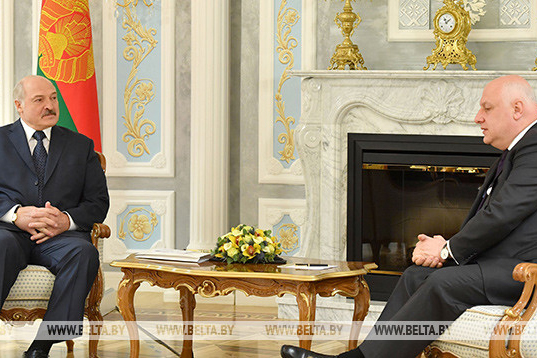 OSCE PA President George Tsereteli with Belarusian President Aleksandr Lukashenko, 29 April 2019 (belta.by)“In light of the ongoing hostilities in Ukraine, I am thankful that Belarus has actively engaged with the international community to support mediation efforts and alleviate human suffering,” said President Tsereteli. “These efforts on the international scene must inspire Belarus to also follow through on commitments to democratic reform and ensure that all Belarusian voices are heard.”

The conversation also considered the proposal to convene a summit aimed at strengthening the Helsinki principles and preventing conflicts in the OSCE area. President Lukashenko encouraged such a high-level meeting as a way to break the deadlock in a number of challenging areas for the Organization, recalling that the last OSCE Summit took place in 2010.

In Minsk, President Tsereteli also met with the Chairman of the House of Representatives of the National Assembly of Belarus, Vladimir Andreichenko, and the Head of the Delegation of Belarus to the OSCE PA, Boleslav Pirshtuk. Talks focused on co-operation between the OSCE PA and the Belarusian parliament, as well as ways to strengthen parliamentary democracy. Tsereteli encouraged his counterparts to make use of OSCE instruments and increase the contributions of civil society to deepen democratic reforms.

The PA President is scheduled to meet tomorrow with Foreign Minister Vladimir Makei and representatives from opposition parties and civil society to further discuss the need to safeguard fundamental rights and ensure an even playing field ahead of parliamentary elections expected later this year.

President Tsereteli is taking part in a two-day visit to Belarus, where he is participating in the parliamentary conference of the Silk Road Support Group, hosted by the National Assembly of the Republic of Belarus under the theme “Belt and Road: Deepening Cooperation for Sustainable Development and Prosperity.” 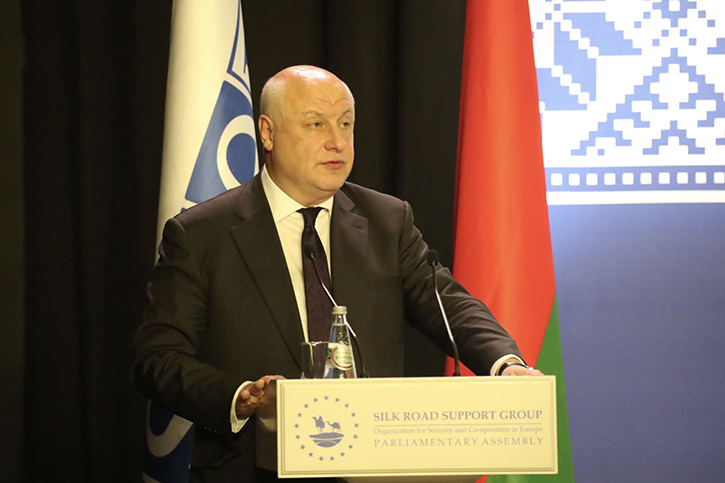 In opening the conference, President Tsereteli noted concerns regarding the growing influence of China in the OSCE area and welcomed the opportunity to encourage greater parliamentary oversight over Belt and Road projects.

“As representatives of our citizens, we all have their best interest at heart. It is our ambition to have our populations benefit to the fullest from new projects and investments,” said President Tsereteli. “This requires transforming any initiative to connect our countries more closely into a joint project with co-ownership for all participating States, and to make sure that local workers are hired to multiply the economic benefits of these investments.”

The event includes the participation of high-level members of the OSCE Parliamentary Assembly. It carries on tomorrow with a visit of a Chinese-Belarusian industrial park, located outside of Minsk.