PRISTINA, 1 February 2019 – The OSCE Parliamentary Assembly encourages all channels of dialogue, including parliamentary diplomacy, as a means to support and improve reconciliation and co-operation in the South East European region, British parliamentarian Mark Pritchard emphasized today in a visit to Pristina, Mitrovica and Gracanica. 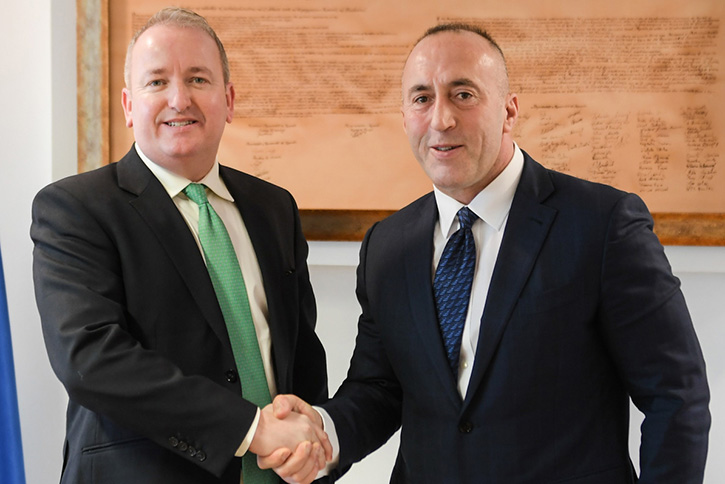 Mark Pritchard and Ramush Haradinaj in Pristina, 31 Jan. 2019Pritchard, who serves as the PA’s Special Representative on South East Europe, has met over the past two days with leaders including Ramush Haradinaj, members of parliament and religious figures, as well as representatives of the OSCE’s Mission in Kosovo.

In meetings, Pritchard has conveyed full support to the European Union-facilitated Belgrade-Pristina dialogue, while reiterating the OSCE PA’s status-neutral approach. He has followed recent discussions regarding proposed border changes, the taxes issue and the transformation of the security forces, Pritchard said.

“Progress is urgently needed in the normalization of relations between Belgrade and Pristina,” Pritchard said. “For real progress to be made it is vital that dialogue continues in good faith and that provocative actions are avoided. As we saw in last week’s agreement between Skopje and Athens over the ‘Macedonia’ name issue, compromise is sometimes difficult but it is the only way forward. I hope that Pristina and Belgrade can follow the same spirit of compromise.”

The Special Representative emphasized that effective regional co-operation is vital for South East Europe and the Belgrade-Pristina dialogue plays a key role in this respect.

In meetings at OSCE Mission in Kosovo offices in Pristina and Mitrovica, as well as in Gracanica, Pritchard expressed support for the Mission’s work in promoting civic participation, developing democratic institutions, gender mainstreaming, promoting anti-discrimination mechanisms, advancing police training, and countering terrorism and cyberthreats. The Mission’s work in supporting the implementation of agreements stemming from the EU-facilitated dialogue between Pristina and Belgrade is also vital, he said.

“As Prime Minister Theresa May recently stated, history has shown that a secure and stable Western Balkans region means a secure and stable Europe,” Pritchard said. “The work of the OSCE in the region has been indispensable in promoting that stability.”

Pritchard continues his programme with meetings with religious leaders in Gracanica and additional meetings in Pristina.

Photos of Special Representative's field visit are available on Flickr.

For a video of a recent interview that Pritchard gave about his work as Special Representative, please click here.