ROVANIEMI, 16 December 2019 – The OSCE PA Special Representative on Arctic Issues, Torill Eidsheim (MP, Norway), delivered today a keynote address to the Sub-Committee on External Relations of the Parliamentary Assembly of the Council of Europe (PACE), convened in Rovaniemi, Finland, for a meeting on developments in the Arctic region and opportunities for international co-operation. 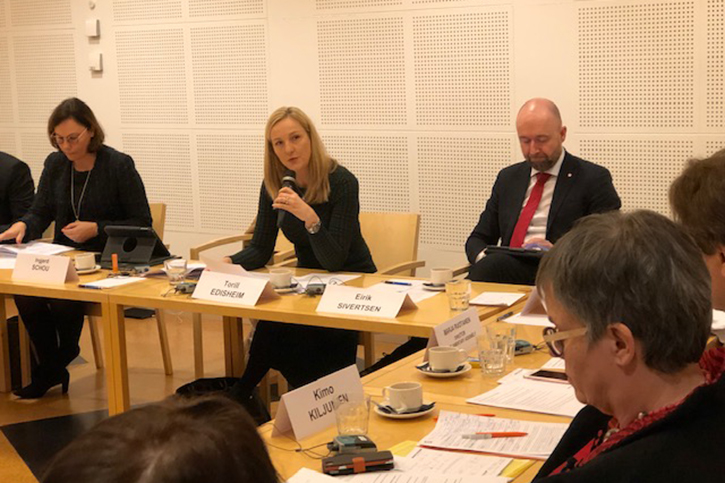 Torill Eidsheim in Rovaniemi, Finland, 16 December 2019In her speech, Eidsheim highlighted the increased attention that the OSCE Parliamentary Assembly is placing on challenges in the High North and stressed the effects of the climate crisis on society. “Starting from the Arctic – earth’s so-called refrigerator – the environment of the whole planet is suffering and this has direct effects on people’s lives,” Eidsheim said. She added that climate repercussions do not concern only Arctic communities and the environment per se but are creating a vortex of other challenges also in the economic and political spheres, including heightened trade and geostrategic competition.

Concerning the need for international co-operation, she called for increased interaction between Arctic organizations and wider multilateral fora: “If we manage to join efforts and combine the expertise of Arctic organizations with the outreach of organizations such as the OSCE we could truly be able to make a difference and better raise awareness on what is happening in the region.”

Eidsheim also advocated greater involvement of parliamentarians in multilateral efforts on the climate, especially considering the disappointing outcomes of the COP25 negotiations in Madrid. “Decisions made elsewhere, as well as the failure to reach conclusions, will have detrimental effects on the Arctic and beyond,” she said.

Special Representative Eidsheim welcomed the recent conclusions of the EU Council on the Arctic as well as the productive bilateral meeting between the current Chair of the Arctic Council (Iceland) and the incoming one (Russian Federation). In this regard, she noted the importance of political convergence of key stakeholders in the Arctic, highlighting the sense of urgency and the need for common ownership of efforts.

For more on the work of the Special Representative on Arctic Issues, please click here.