ATHENS, 6 March 2020 – International humanitarian law must be respected in the response to the situation on the borders between Turkey and Greece, said OSCE Parliamentary Assembly Special Representative on South East Europe Mark Pritchard (MP, United Kingdom) wrapping up a three-day official visit to Athens today. 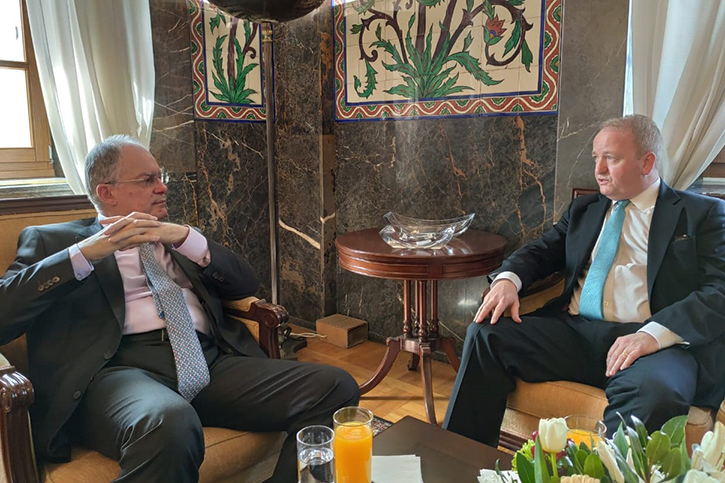 Konstantinos Tasoulas and Mark Pritchard meet in Athens, 5 March 2020Having met with senior political leaders across the political spectrum in Greece, Pritchard expressed confidence that the response to the border emergency is being handled with consideration for the best interests of refugees and migrants, Greek society, and Europe as a whole. However, he cautioned the situation should not be used for political gain and urged all stakeholders to use responsible political rhetoric and to pursue broad-based dialogue.

“We in the OSCE Parliamentary Assembly and the broader international community are following the situation on the Turkish-Greek borders very closely indeed,” Pritchard said. “I commend the Greek people and the Greek government for responding to the situation with restraint and encourage the continuation of cross-party dialogue and convergence.”

He added that Europe needs to accept responsibility in assisting Greece at this critical moment, with an emphasis on tangible burden-sharing beyond financial solidarity. “This is not only a Greek emergency,” Pritchard said. “It’s a collective one. Collective emergencies and challenges demand collective responsibility. The recent high-level EU visit needs to have tangible and practical outcomes.”

He pointed out that the country has long been dealing with a humanitarian crisis – including on the islands of Lesvos, Chios and Kos – which is now at a critical point. Addressing the situation is necessary to ensure respect for principles enshrined in international law, including the Refugee Convention of 1951, and also in order to sustain Greece’s positive economic reform agenda, he pointed out.

Pritchard suggested that a “revised” EU-Turkey Statement should be forthcoming “as quickly as possible” and ensure that the Greek perspective was “full considered and appreciated” by the European Union. He also suggested that Greece and Turkey should establish a joint working group on the issue of relocation and resettlement of proven asylum seekers into the EU, but this could only be done once current tensions have eased. 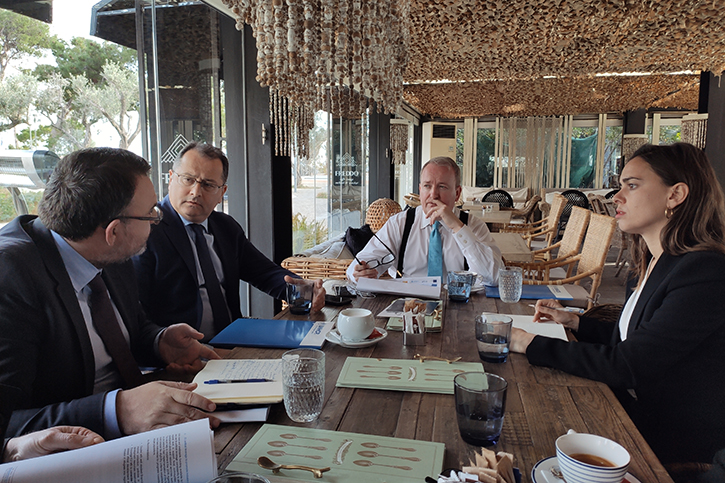 Mark Pritchard meeting with OSCE PA Head of Delegation Georgios Stylios, Petros Mastakas (UNHCR) and Marianna Pateraki (IOM), 5 March 2020From 4-6 March, Special Representative Pritchard has met with a range of political actors in the Greek capital, including ministers, parliamentarians and representatives of international organizations. He also visited the Asylum Schisto Accommodation Site for Refugees on the outskirts of the city, which included a trilateral meeting with the International Organization for Migration and the UN High Commissioner for Refugees.

In meetings with Minister for Agriculture Makis Voridis, Minister for Migration and Asylum Notis Mitarakis, and Minister for Development and Investment Adonis Georgiadis, much of the discussion focused on migration-related fatigue among local inhabitants in Greece, particularly on the islands.

The interlocutors stressed that the situation is placing strain on the Greek coastal and border police as well as on Greece’s ability to cope with large-scale migration flows, including from a financial standpoint.

Meetings were also held with Speaker of the Parliament Konstantinos Tasoulas, Ambassador Eleni Sourani, Secretary General for Public Order Konstantinos Tsouvalas, and Members of the Standing Committee on National Defense and Foreign Affairs, the Special Standing Committee on European Affairs, and opposition leader Alexis Tsipras, President of SYRIZA. He also met with Georgios Stylios, Head of the Greek delegation to the OSCE PA.

Besides migration issues, talks focused on the conclusion of the Prespa Agreement, with Pritchard expressing hope that North Macedonia will remain committed to the agreement, including after the 12 April parliamentary elections. The sides discussed general developments in the Western Balkans, regional co-operation, and the OSCE’s work in the region.

Pritchard was briefed on key domestic issues and economic indicators in Greece, unemployment, youth engagement and education, as well as the reform agenda on issues such as the pension system, tax, and corruption. Interlocutors also discussed national contingency planning and preparedness for the public health concerns surrounding the coronavirus outbreak.

Finally he added: “Greece’s borders are the EU’s borders. Turkey needs to act as a responsible actor in the region.”

For more on the work of the Special Representative on South East Europe, please click here.