In their meetings, Tsereteli and Montella have underlined the crucial role of the OSCE Parliamentary Assembly as forum of dialogue and expressed gratitude for the continued U.S. engagement in the organization. 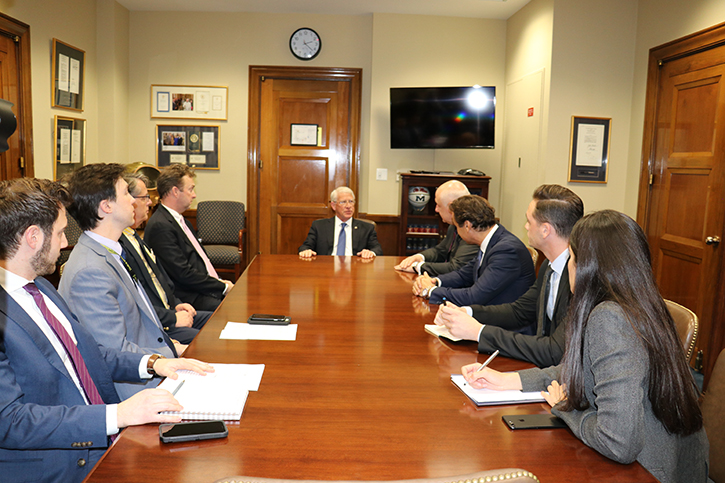 “At a time of uncertainty and growing divides across the Atlantic and in Europe, we need a strong and effective multilateral system where the OSCE can serve as a forum for real confidence-building not only to address these divisions but to take care of unfinished business, including protracted conflicts,” said President Tsereteli. “The United States’ commitment and active role is vital in building a new era of trust and support for our collective OSCE security and democratic values.”

Meetings with OSCE PA Vice-President Sen. Roger Wicker, Congressmen Robert Aderholt and Adam Kinzinger on Wednesday and Thursday focused on the importance of active U.S. participation in the Parliamentary Assembly, on the conflict in Ukraine, the illegal occupation of the Georgian regions of South Ossetia and Abkhazia, and other challenges such as terrorism and migration.

On Thursday, Tsereteli met Acting Assistant Secretary of State in the Bureau of European and Eurasian Affairs Ambassador Philip Reeker to discuss current priorities of the Assembly and efforts to ensure security and stability in the OSCE region.

On Tuesday, Tsereteli and Montella also participated in a forum on cyber security in South East Europe focused on 5G technology. On Thursday, the President addressed a roundtable on “Strengthening Democracy, Security and Transatlantic Cooperation” at the German Marshall Fund of the United States. The conversation centered on democratic and human rights backsliding and responses to the emerging role of China in the international scene.

While in Washington, Tsereteli and Montella also attended the National Prayer Breakfast, which was addressed by President Donald Trump. They had an opportunity to exchange with several guests and dignitaries including Secretary of State Mike Pompeo.

Earlier in the week, they attended and addressed the seminar on “Future Leadership for Political inclusion in the OSCE Region” hosted by the United States Helsinki Commission. The conference was chaired by Head of United States' delegation Alcee Hastings and featured an intervention by Congressman Steny Hoyer.

As part of his official visit, President Tsereteli testified in front of the United States Helsinki Commission at a hearing on “The Power and Purpose of Parliamentary Diplomacy.”