MARRAKECH, 4 October 2019 – The OSCE Parliamentary Assembly’s 18th Autumn Meeting kicked off in Marrakech, Morocco, today with calls for greater co-operation between north and south, as well as east and west. Security in Europe and security in the Mediterranean region are mutually reinforcing, participants stressed, and require strong multilateral engagement. 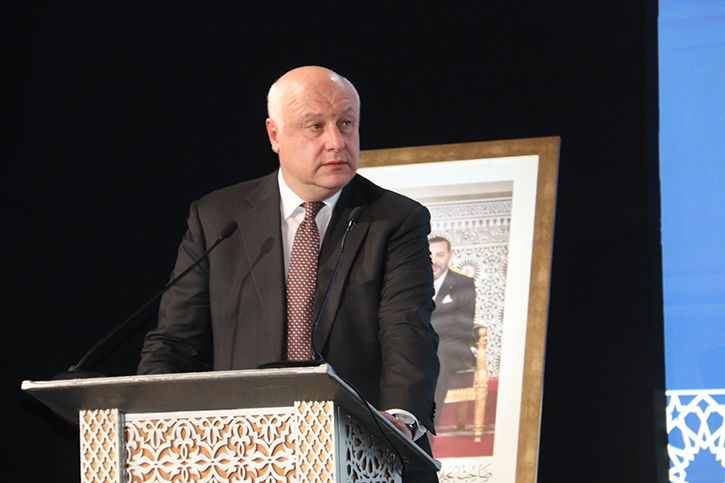 President Tsereteli noted that with the 30th anniversary of the fall of the Berlin Wall next month, the historic importance of the Helsinki Process of the 1970s in bringing an end to the Cold War should be appreciated.

“Together we must build on the work of our predecessors who fought so hard for the principles of this organization. We cannot let those principles fail on our watch. It is our responsibility today to revive the spirit of solidarity that led to the fall of the Berlin Wall,” he said.

He noted that similar processes have taken place in Africa, with various projects attempting to build a political consensus to preserve African independence and unity in the post-colonial era. Several nations of North Africa have also participated in the OSCE through the Mediterranean Partnership, Tsereteli pointed out, with the Partnership marking its 25th anniversary this year.

More than 300 participants, including 190 parliamentarians, have gathered in Marrakech from some 50 countries. It is the first time that the OSCE PA is holding a meeting in an OSCE Partner for Co-operation, and the first time meeting in Africa. 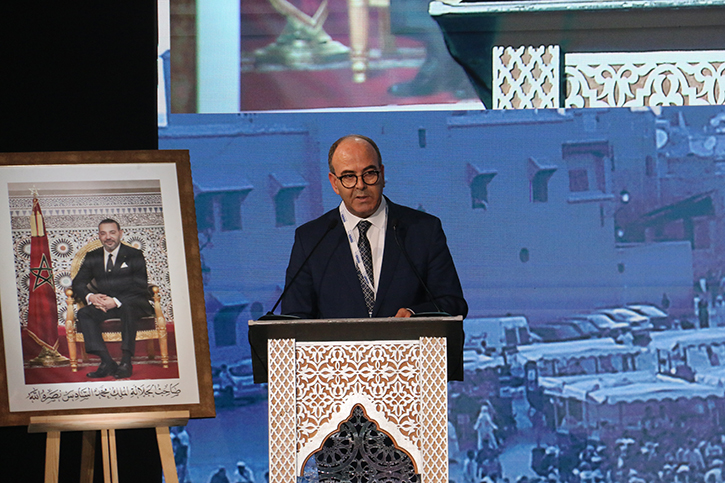 President Benchamach underlined the need to root out the causes of tensions and threats for the whole region. Mediterranean countries are faced with common challenges, he said, including the threat of terrorism and hate speech.

“The question we need to ask is what extent we can achieve significant results without disarming terrorist groups that are involved in geopolitical conflicts and rivalries,” Benchamach said. He also emphasized the link between terrorism and globalization and questioned the geopolitical strategy of “creative chaos,” stressing the importance of all countries working together. 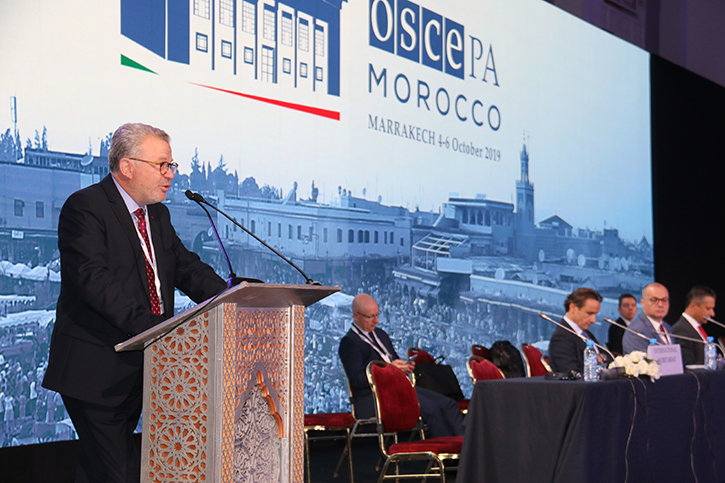 Pascal Allizard opens the Mediterranean Forum, Marrakech, 4 October 2019In his opening remarks, Allizard noted that the Mediterranean is a shared space that many OSCE PA member countries border. “Each of us is particularly attached to its future,” he said, noting that the region is at the center of concern of several sources of crises and tensions, including terrorist threats throughout the Mediterranean basin and the migration crisis, which follows three main routes across the Mediterranean Sea.

The war against terrorism in the Levant has seen military activities conducted or co-ordinated from the eastern Mediterranean, Allizard said, and the region is impacted by friction between NATO and Russia on the eastern flank of Europe. He also discussed the efforts of China to build infrastructure connecting various regions including the Mediterranean. He advocated a shared strategic vision underpinned by the exchange of information regarding projects spearheaded by China.

Minister Voridis, a former member of the Greek Delegation to the OSCE PA and Chair of the Ad Hoc Committee on Countering Terrorism, said that it is not possible to address international challenges such as climate change, corruption and terrorism only at the national level. He stressed that multilateral co-operation is essential, and that through its growing level of activities, the OSCE PA is adding real value to these processes.

Economic connectivity is necessary for security, said Ambassador Hasani in his remarks. He also focused on promoting youth participation in societies. Migration is a constant in human history, he said, but it should be an option, not a necessity.

The Mediterranean Forum also featured the participation of the parliamentary delegations from the OSCE Mediterranean Partners for Co-operation, including Algeria, Egypt, Jordan, and Morocco. The parliamentarians raised issues related to security, the environment, economic development and migration.

The OSCE PA’s 18th Autumn Meeting is taking place 4-6 October. Consisting of a Parliamentary Conference, Mediterranean Forum and a meeting of the Standing Committee, the Autumn Meeting is being held under the theme “Promoting Security Across the Euro-Mediterranean Region: The Role of the OSCE and its Partners.”

For the full remarks of President Tsereteli, please click here.

Photos are available on the OSCE PA Flickr page.

Videos can be found on the PA’s YouTube channel.

For more information, including speeches and programmes, please click here.