COPENHAGEN, 1 August 2019 – Norwegian parliamentarian Abid Raja has been appointed as Chair of the OSCE PA’s Ad Hoc Committee on Countering Terrorism (CCT) and will take up his responsibilities immediately. OSCE PA President George Tsereteli (MP, Georgia) made the appointment Monday and also this week appointed Lisa Chambers (MP, Ireland) as Co-Chair of the CCT. 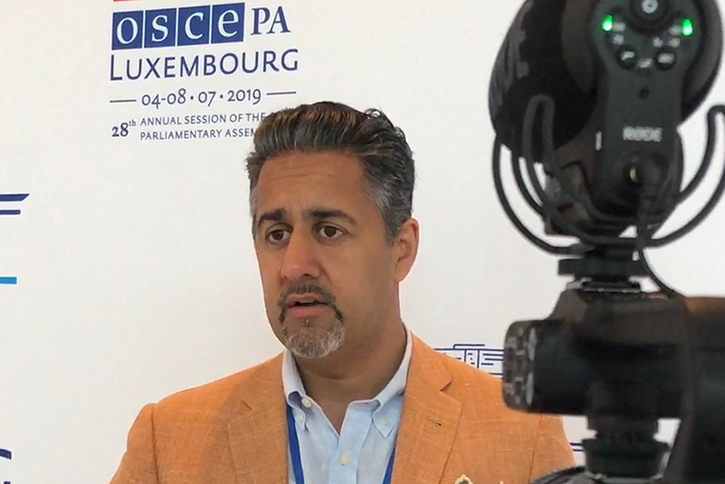 Abid RajaIn his appointment letter to Raja, Tsereteli noted that under the leadership of the previous Chair, Greek parliamentarian Makis Voridis, the CCT has become a widely recognized and respected actor in the counter-terrorism arena, bringing increased focus and visibility to the work of OSCE parliamentarians in this domain.

“We significantly built on our oversight powers by developing an innovative parliamentary initiative pushing for the implementation of international counter-terrorism commitments on border security and information sharing,” Tsereteli wrote. “The Assembly leveraged on its convening and bridging powers through goal-oriented and innovative partnerships with the OSCE executive structures, the United Nations and other parliamentary assemblies.”

He also highlighted the Assembly’s policy-making ability by adopting two resolutions tackling priority issues related to counter-terrorism. At the recent Annual Session in Luxembourg, the Assembly adopted the resolution “The Challenges Related to Returning and Relocating Foreign Terrorist Fighters,” which urges OSCE participating States to bring to justice anyone who supports, facilitates, participates or attempts to participate in terrorist acts and to address challenges related to FTFs’ accompanying family members by developing legal frameworks to focus on their specific concerns, vulnerabilities and needs.

“It is a great honor to be a part of this committee,” Raja said today. “It’s a very important committee working to determine the reasons for extremism and terrorism in the OSCE area and to address those root causes. We must develop strong and effective policies both for the short-term but also in the long-term. I look forward working with politicians in the OSCE area and international bodies to combat all forms of extremism.”

Lisa Chambers“Unfortunately, with senseless violence continuing to claim innocent lives, this topic continues to be relevant to the international community,” Chambers said. “Parliamentarians have an important role to play in the international response, working in synergy with the OSCE executive structures and global stakeholders such as the United Nations through targeted initiatives.”

The CCT works to advance OSCE PA’s efforts in the field of countering terrorism with a special emphasis on cross-dimensional issues and explore innovative approaches in the OSCE region. It considers terrorism trends and develops forward-looking policy recommendations aimed at enhancing the role of the OSCE and supporting participating States efforts to implement effective and human rights-complaint counter-terrorism responses.

“In a world where many organizations actively work together to fight terrorism, the OSCE PA contributes through the unique perspective of the representatives of over one billion citizens to improve the implementation of relevant legislation and build more resilient societies,” added the OSCE PA Secretary General Roberto Montella.

For more information about the CCT, including a recent interview that Raja gave about its work as well as relevant resolutions and background materials, please click here.