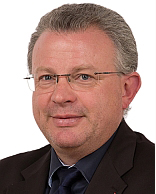 Allizard was elected to the French Senate in 2014 and also serves as a Vice-President of the OSCE PA.