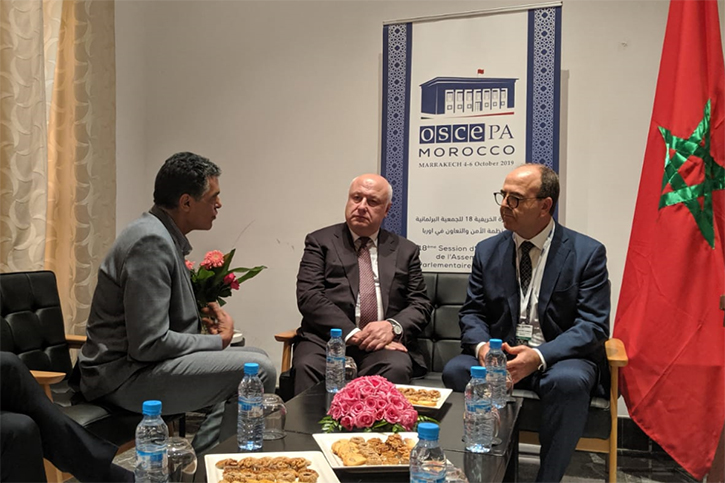 Bilateral meeting between OSCE PA President George Tsereteli and Speaker Hakim Benchamach, Marrakech, 4 Oct. 2019The outcome of these discussions will help inform and guide the OSCE PA in its Mediterranean activities for years to come, he said. Hakim Benchamach, President of the House of Councillors of the Kingdom of Morocco, thanked the OSCE parliamentarians for their active engagement in Marrakech.

The Parliamentary Assembly met for its 18th Autumn Meeting on 4-6 October under the theme “Promoting Security Across the Euro-Mediterranean Region: The Role of the OSCE and its Partners.” It was the first time for the PA meeting in a Partners for Co-operation country, and the first time in Africa.

“Following this important meeting, the OSCE PA will continue to actively support the OSCE’s Mediterranean dimension from a parliamentary perspective, enhancing relations between the Organization’s participating States and the Mediterranean Partners for Co-operation and among the Partners themselves,” Tsereteli said.

Friday’s Mediterranean Forum was chaired by OSCE PA Vice-President and Special Representative on Mediterranean Affairs Pascal Allizard (France), and featured the participation of the parliamentary delegations from OSCE Partners for Co-operation, including Algeria, Egypt, Jordan, and Morocco. 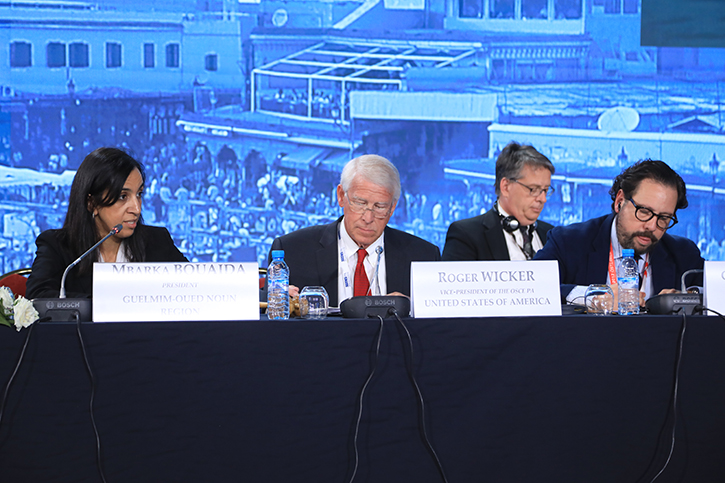 Session one of the parliamentary conference on 5 Oct. 2019.Chaired by OSCE PA Vice-President Roger Wicker (United States) session one of the parliamentary conference focused on the “OSCE and the African Regional Co-operation for Innovation and the Exchange of Good Practices.” Opening the session, Vice-President Wicker said that with its comprehensive approach to security, the OSCE can play a valuable role in strengthening dialogue with regional partners on a wide range of common issues.

The session’s keynote speaker, Mbarka Bouaida, President of the Guelmim-Oued Noun Region in Morocco, focused on recent developments in Morocco and the North African region including economic development and social development. As the first woman elected as a Moroccan regional leader, she also discussed related gender issues. 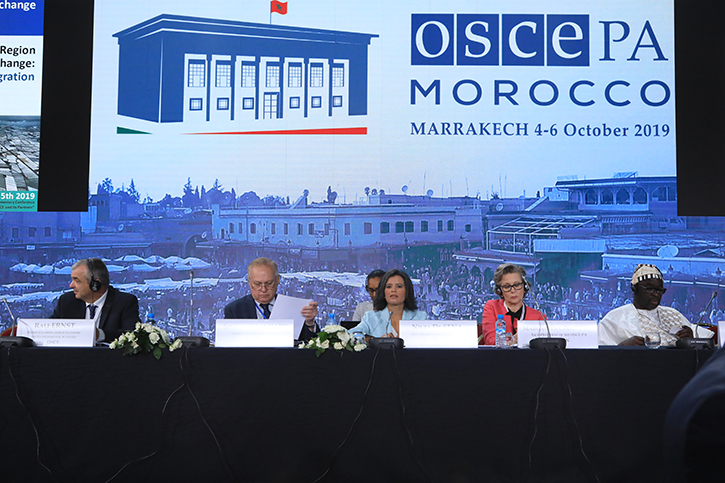 Session two on 5 Oct. 2019Moustapha Cisse Lo, Speaker of the Economic Community of West African States (ECOWAS) Parliament, described the dramatic consequences of climate change and emphasized the urgent need to implement the Paris Agreement. He talked about climate change as a major challenge to Africa, noting that it exacerbates existing problems of the region, such as lack of good governance, poor water management and massive migratory movements.

Ralf Ernst, representing the OSCE Economic and Environmental Activities (OCEEA), said that climate change is a threat multiplier, affecting water security, extreme weather and disrupting economies. The OSCE is engaging on this topic by training key stakeholders on the security impact of climate change, he said, and suggested several avenues for deeper co-operation between the OCEEA and the PA.

In the discussion, members raised points related to the comprehensive security model of the OSCE, noting that climate change impacts all three dimensions of security: the politico-military, economic-environmental, and the human dimension.

Session three on 6 Oct. 2019Session three covered the topic “Combating Intolerance and Discrimination Based on Religion or Belief.”

“At the heart of this topic is of course the understanding of fundamental equality of people,” Vice-President Henriksen said in her opening remarks. “This means countries have the responsibility to respect and protect the freedom to believe as well as to not believe.”

In his remarks, Belkebir described the work of his center, which he explained tries to counter radical narratives and religious extremism by demonstrating that extremist ideology is not based on verses in the Koran, and emphasizing the real meaning of Islamic teachings.

Amb. Pacaci discussed the work of the OSCE Slovak Chairmanship in developing a comprehensive approach to combating hate crimes and other forms of intolerance. Discriminatory discourse that has become more prominent over decades, and particularly after the terrorist attacks on New York and Washington on 11 September 2001, has recently been manifesting more in acts of violence and intolerance against Muslims, he noted.

In the discussion, parliamentarians reminded of the importance of pro-actively speaking out against intolerance, and the power of education in contributing to respect and combating intolerance. 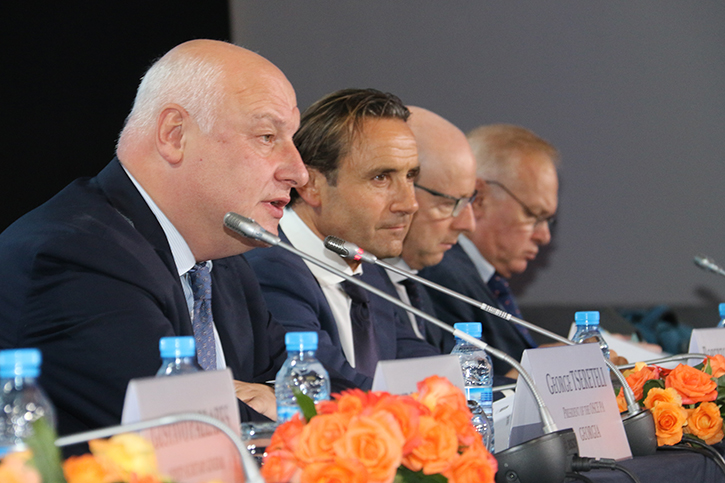 President Tsereteli chairs the Standing Committee meeting, 5 Oct. 2019Saturday’s Standing Committee meeting of heads of national delegations featured discussions on a wide range of issues, including developments in Tunisia, Cyprus, and the Nagorno-Karabakh conflict. OSCE PA Treasurer Peter Juel-Jensen (Denmark), Chair of the Sub-Committee on Rules of Procedure and Working Practices Peter Bowness (United Kingdom) and Secretary General Roberto Montella reported to the committee on the Assembly’s finances and efforts to streamline and improve the services provided by the International Secretariat to the Members of the Assembly.

The Ad Hoc Committee on Migration met earlier in the day and heard from special guests representing the government of Morocco and the International Organization for Migration. Chaired by Nahima Lanjri, the committee discussed issues related to Moroccan migration policy and the return and reintegration of migrants.

The Ad Hoc Committee on Countering Terrorism met on Friday to discuss the role of the PA in counter-terrorism, including a project to promote the adoption and implementation at the national level of obligations stemming from UN Security Council Resolution 2396 on border security and information sharing.

More than 300 participants, including 190 parliamentarians, from some 50 countries gathered in Marrakech for the Autumn Meeting.

Secretary General Montella expressed satisfaction for the productive and successful outcome of the meeting.

“I am very grateful to our Moroccan hosts for organizing this event,” Montella said. “By meeting at the frontier of the OSCE region, the OSCE PA and its partner countries wished to send a clear message: we must make use of all forms of co-operation to revive effective multilateralism, to address common threats and to benefit from common opportunities. The PA will remain engaged on this.”

For the President’s Conclusions, click here for English and here for French.

For a press release on the opening day of the Autumn Meeting, please click here.

Photos are available on the OSCE PA’s Flickr page.

Videos can be found on the PA’s YouTube channel.

For more information, including speeches and programmes, please click here.