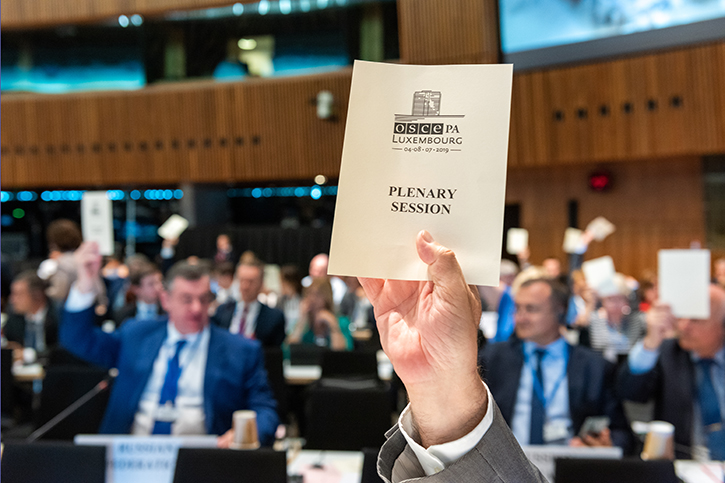 Plenary voting in Luxembourg, 7 July 2019Following five days of work at the OSCE Parliamentary Assembly’s Annual Session in Luxembourg, which featured spirited debates and closely contested amendments, the parliamentarians adopted the Declaration in plenary by a vote of 94-7, with 11 abstentions. The theme of the Annual Session was “Advancing Sustainable Development to Promote Security: The Role of Parliaments.”

The Declaration emphasizes the commitment of OSCE PA members to implementing the United Nations 2030 Agenda for Sustainable Development and its 17 Sustainable Development Goals. It urges parliaments and governments of OSCE countries to facilitate ratification of the 2015 Paris Agreement on climate change and fulfill their obligations to limit greenhouse gas emissions. It welcomes the adoption of the Global Compact for Safe, Orderly and Regular Migration and the Global Compact on Refugees. (Download the Declaration in English, French and Russian here.)

It regrets the collapse of the Intermediate-Range Nuclear Forces Treaty, urges all sides to recommit to the preservation of effective arms control, disarmament and non-proliferation, and encourages OSCE participating States to sign the 2017 Treaty on the Prohibition of Nuclear Weapons.

It calls on OSCE countries “to place promotion and protection of human rights at the centre of their domestic as well as their foreign policy agendas” and encourages governments, parliaments, judicial bodies and national human rights institutions to consider requesting that the OSCE Office for Democratic Institutions and Human Rights prepare legal reviews of laws and draft laws to ensure compliance with OSCE commitments.

Condemning all forms of terrorism and extremist violence, the Declaration calls on parliaments and governments to respond effectively to challenges stemming from returning and relocating terrorist fighters (FTFs), including by developing gender- and age-sensitive responses that reflect the varying roles of women and children as FTFs and family members of FTFs.

It recommends carbon pricing to account for the environmental harm of CO2 emissions and to leverage economic incentives to move towards clean energy.

Urging a cessation of hostilities in eastern Ukraine, the Declaration calls for “the full withdrawal of heavy-calibre weaponry by both sides, an immediate end to the use of landmines and greater investment in demining efforts, the de-occupation of the Autonomous Republic of Crimea and the city of Sevastopol, the withdrawal of Russian military forces from Ukrainian territory, and a comprehensive settlement based on full implementation of the Minsk Agreements, in particular the obligations under the Minsk Agreements which have not been fulfilled by the Russian Federation.”

The Declaration also encourages the leaders of Armenia and Azerbaijan to intensify their dialogue in the context of the mediation led by the OSCE Minsk Group Co-Chairs and to take “specific and tangible measures to reach a peaceful solution to the Nagorno-Karabakh conflict.”

Montella thanked OSCE PA members today for their participation in the Luxembourg meeting and their dedication to the Parliamentary Assembly.

In addition to adopting the Luxembourg Declaration today, the PA also elected officers for the 2018-2019 term.

OSCE PA photos are available on our Flickr page.

Videos can be found on the PA's YouTube channel.

Download the Luxembourg Declaration in English, French and Russian here.