LEINSWEILER, 6 May 2019 – Bringing together parliamentarians, scholars, OSCE officials, business leaders, and representatives of other regional organizations, the OSCE Parliamentary Assembly’s fifth Leinsweiler seminar this weekend explored lessons learned from European history on the power of economics as an instrument of conflict prevention and rehabilitation – or as a source of conflict. 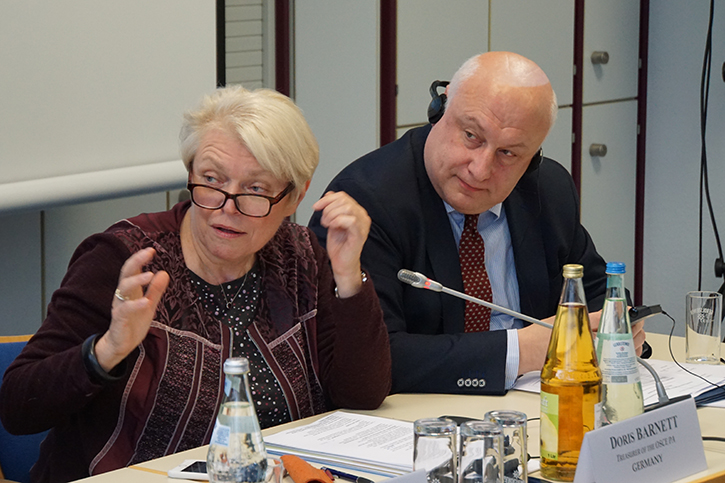 Doris Barnett and George Tsereteli open the Leinsweiler seminar on 4 May 2019.Taking place on 4-5 May in the state of Rheinland-Pfalz, Germany, the Leinsweiler seminar addressed topics such as “Post-War Conflict Rehabilitation and Prevention Through Economic Co-operation” and “Customs Regimes, Economic Integration and Co-operation Between Different Integration Processes.”

OSCE PA President George Tsereteli (Georgia) and Treasurer Doris Barnett (Germany) opened the seminar on Saturday noting that European stability is rooted in economic ties, which is a lesson that was learned through the painful experiences of the 20th century. Tsereteli noted that the venue of the meeting is a powerful reminder of how economic competition has fueled conflicts, but how economic co-operation has helped forged peace.

“While coal and steel production was a major obstacle to French-German reconciliation in the first half of the 20th century, it also provided the foundation for a united Europe by inspiring the European Coal and Steel Community,” Tsereteli said. “By meeting in Leinsweiler this weekend, let’s remember that with time and dedicated efforts to educate and to recall the lessons of history, durable peace can be re-established, even in the most unstable regions of the OSCE.”

Barnett, who heads the German Delegation to the OSCE PA, recalled the motivation for establishing strong economic foundations for co-operation. “After the horrors of the Second World War, Europeans were determined to secure lasting peace,” she said. “The European Coal and Steel Community, the European Economic Community and the European Atomic Energy Community began to unite European countries economically and politically as of 1950.”

She noted that the International Rhine Commission developed a dynamic approach to return to economic activity of the Rhine corridor after World War Two.

Tsereteli and Barnett underlined that the aim of the Leinsweiler seminars is to promote dialogue between OSCE participating States at a time where entrenched positions and nationalist rhetoric, as well as unilateral actions which run contrary to the founding principles of the OSCE, have threatened to undermine trust and the ability to find common ground.

Also addressing the opening was Amb. Katarina Žáková, Deputy Permanent Representative from the Slovak OSCE Chairmanship, who spoke about the importance of effective multilateralism. She stressed that the Slovak Chairmanship is seeking to build dialogue to find solutions to the conflicts affecting the OSCE area, including by addressing the economic consequences for the populations.

Bringing together some 20 Members of Parliament from 10 countries, the Leinsweiler seminar also included the participation of OSCE PA Secretary General Roberto Montella and the OSCE PA’s Special Representative in Vienna Amb. Andreas Nothelle, as well as representatives from the governmental side of the OSCE, including Amb. Vuk Zugic, the Co-ordinator of OSCE Economic and Environmental Activities, and Amb. Kairat Sarybay, Chair of the OSCE’s Economic and Environmental Committee. Other participants included leading academics, representatives of regional organizations and of the private sector.

In discussions, participants raised issues such as connectivity and energy security. In several sessions, the resilience of transborder economic co-operation after certain conflicts, or even during the Cold War, was presented as an encouraging signal to the populations most affected by current conflicts.

Previous Leinsweiler seminars have been held in 2015, 2016, 2017, and 2018. The seminars are dedicated to promoting parliamentary contributions to OSCE efforts in addressing conflicts. They are hosted by the Delegation of Germany to the OSCE PA and supported by the German Foreign Ministry.

Photos from the Leinsweiler seminar are available on Flickr.